Our Mission is to share the Spirit of the Northwoods while preserving a paradise of beauty with youth, families, and their leaders through YMCA  programs that build healthy mind, body, and spirit for all.

Camp Olson YMCA is a resident summer camp for youth ages 5-17 and families.

As an independently chartered YMCA Camp, we’re proud to be a part of a broad and diverse network of YMCA Camps across the U.S. We are guided by our core values of caring, honesty, respect, responsibility, and equity.

Camp Olson YMCA is a 501(c)3 non-profit and accredited by the American Camping Association. 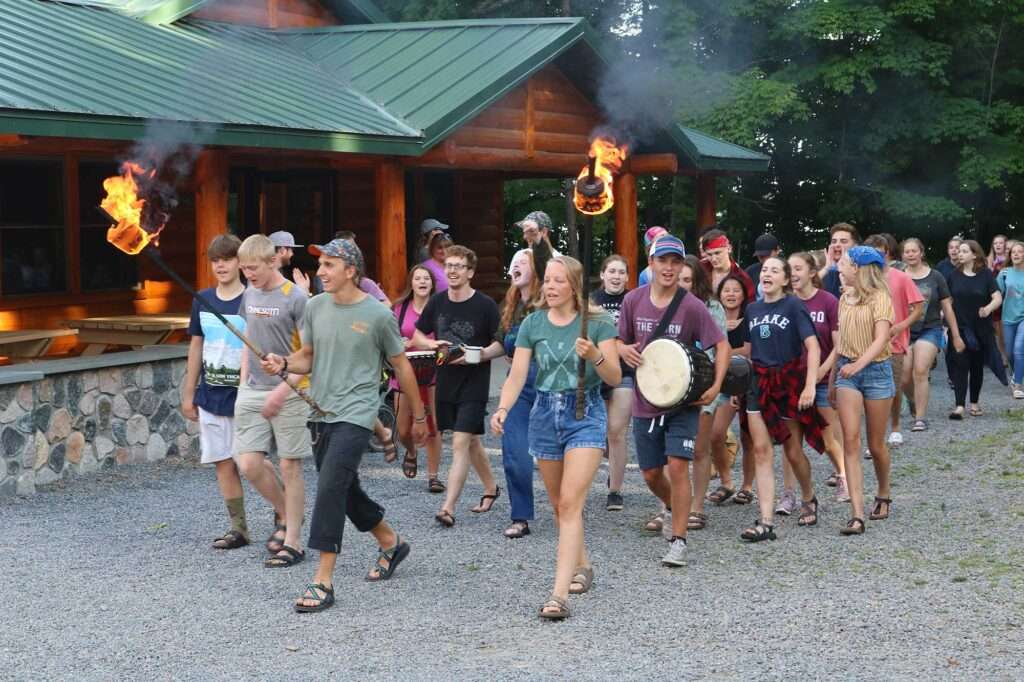 YMCA’s purpose is to strengthen communities, not just our own. Camp Olson serves youth and their families from around the world. Over recent years, we have served campers from more than 30 states, and 14 countries.

We drive change and strive to make a positive impact on individuals, families and communities through youth development, healthy living and social responsibility.

Camp Olson was founded in 1954 “to preserve a paradise of forest beauty where youth and their leaders can find joy and inspiration in the years to come.”

We accomplish this every summer by providing programs for youth and adults that develop life skills, cultivate leadership, and foster an ethic of land stewardship and environmental responsibility. 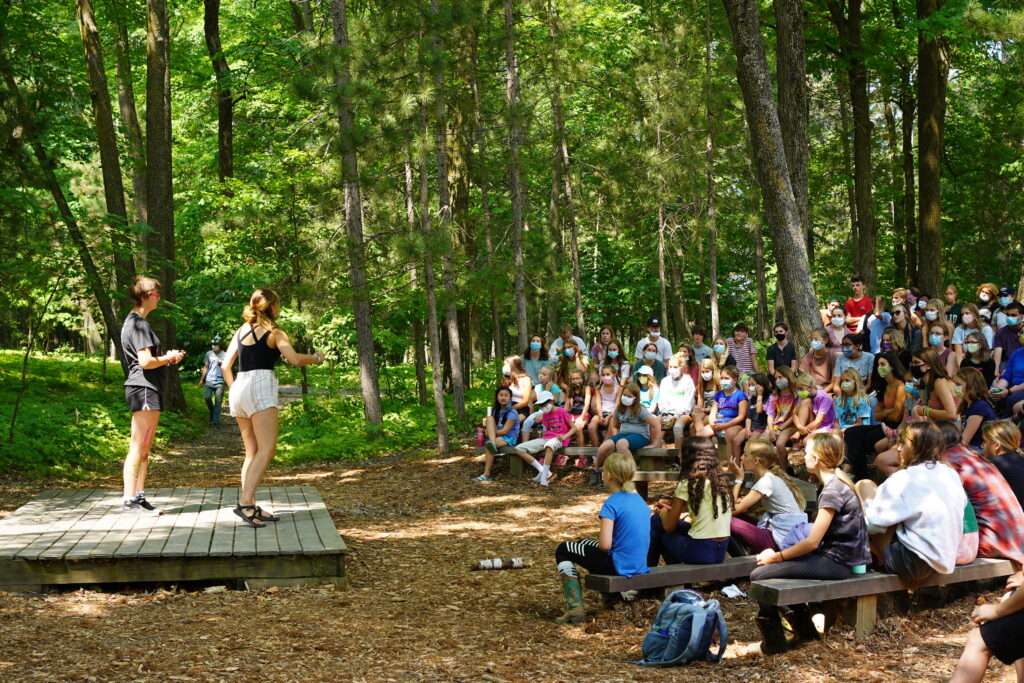 We acknowledge that YMCA Camp Olson is located on the traditional, ancestral, and contemporary lands taken from the Ojibwe people in the 19th century. We honor and respect those who were forcibly removed from and who are still connected to the land on which the camp is located. We will work to protect and honor this place, and to build relationships with all of the people who have called this place home.

Though Camp Olson YMCA was founded in 1954, the history of the land and the program has been rich before and since.

The Laurentide Ice Sheet advanced and receded over the land shaping the hills and leaving behind the lakes and glacial stones which now line our fire pits and can be found throughout the property.

Ancestral Land of the Dakota

In the 1600's, the Dakota Indians had communities in the area of Leech Lake, to the north of Little Boy Lake.

Ancestral Land of the Ojibwe 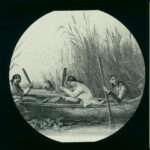 The Ojibwe bands moved into the region during the mid-to-late 1700's. The Ojibwe people long lived within the rich ecology of the region. They moved according to a seasonal subsistence economy---fishing in the summer, harvesting manoomin (wild rice) in the fall, hunting, trapping, and ice fishing in the winter, and tapping maple syrup and spearfishing in the spring.  Their main building material, wiigwaas (birch bark), could be transported anywhere to make a wiigiwam (lodge shelter).

The Dakota and Ojibwe were the primary trappers of fur-bearing animals in the Northwest Territory. In exchange for these furs, European traders provided goods such as blankets, firearms, cloth, and metal tools.

By the 1840s the fur trade had declined dramatically in the  region, partially due to changes in fashion tastes, the availability of less-expensive materials for hat-making, and because the US government reduced Dakota and Ojibwe hunting grounds through treaties. For many Dakota and Ojibwe people, who had by this time become increasingly dependent on the trade, exchanging land in order to pay off debts claimed by traders became a matter of survival.

The Treaty of Washington

In the Treaty of Washington the Ojibwe lost a large portion of their land to the US government. The treaty established the Leech Lake and Mille Lacs Reservations.

A 28 mile railroad was built to connect seven different logging camps and operated from 1890-1911, hauling logs to Cross Lake where they were floated to the Mississipi River and downsteam to lumber mills. In 1894, federal law granted the Northern Mississippi Railroad 50 feet of land along either side of the centerline of its route through the Leech Lake, Chippewa Indian, and Winnebagishish Reservations. This railroad ran right through what is now known as Camp Olson and is now referred to as the "Old Grade".

The town of Longville was established circa 1906 as a logging town. As loggers moved out, tourists moved in. Area logging created many open fields scattered through the forests, prime for farming and agriculture. The many lakes in the areas brought people north for recreation.

E.O. Olson, a poultry farmer from Worthington, MN purchased 1600 acres of farm and timberland property in the Longville area. The land is used for tree and poultry farming and recreation, which will eventually become Olson Farm YMCA Camp. 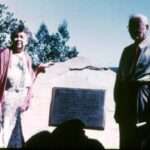 E.O. and Bella Olson gave the now 1390 acre property to the YMCA hoping "to preserve a paradise of forest beauty where youth and their leaders can find joy and inspiration in the years to come." 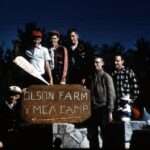 Max Clowers of the North Central Area (NCA) YMCA is appointed as Founding Director. The Lower Cabin is built and grading begins for cabins and dining hall. The first campers from Minot, Worthington and Winona present in late summer.

Farming operations are discontinued and Olson Farm YMCA Camp officially opens on June 23rd with a staff to camper ratio of 1:1 and that fall changed its name to Olson YMCA Camp.

The first backcountry canoe trip was launched into the Boundary Waters Canoe Area in the summer of 1960: The start of Camp Olson's tripping and seed to the future leadership development program.

NCA YMCA joins with West Central Area Council of YMCAs to form the Mid America Region of YMCAs. As a result, Camp Olson Committee disbanded and YMCA Camp Olson Board of Directors formed. Management was transferred to four YMCAs: Rochester, Winona, Austin and Worthington, each of whom furnished Board Members in proportion to their level of participation.

The cabins in camps were only known by numbers, until 1971 when cabins were re-named to that of prominent Voyageurs and European Explorers in the area.

Les Blacklock, outdoorsman, photographer and writer spends one month at
Camp leading to an ecological model and inspiration for the future. 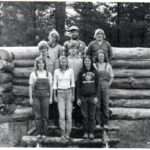 Per Les Blacklock's suggestion, a Pioneer Wilderness Cabin was erected by groups of campers using authentic tools and techniques of the time. Originally, the cabin was to be built at the south point of Lone Pine Field, but after a failed attempt, was built where it stands today. The Homestead Cabin was finally erected in 1991.

There is serious financial strife and Camp sells 200+ acres of property. The Board of Directors vote to return camp to North Central YMCA. NCA responds with appointment of a committee to reorganize and with a loan to continue operation. Dave Rogers takes over as Camp Director and Dick Perkins as Chairman, together, they saved Camp Olson as we know it today.

Camp Olson was named Cass County's Conservationist of the Year after putting over 200 acres of land into a conservation easement.

Camp Olson acquired Camp Seclusion, adding an additional 50 acres and 4,000 feet of shoreline on Cooper Lake to Camp's Property. This property became home to the Adventure Outpost and base camp to our tripping program.

Due to the COVID-19 Pandemic, Camp Olson YMCA ceased summer operation for the 2021 season. This was the first summer since 1954 that camp was not filled with happy campers and their leaders.

Carmen & Jim Campbell gifted 103 acres to camp, which borders the south side of the Shurds property. This property was named "Norrsken" which is Swedish for Northern Lights.

Over the last 3 years, Camp Olson has put over 700 acres and 20,000 feet of shoreline into conservation easement, “preserving a paradise of beauty for youth and their leaders for years to come”. In 2021, Camp Olson was named Minnesota Land Trust's Partner of the  Year.

Cabin names were updated to represent the names of native plants and trees.

Register for your favorite camp Today!

Camp Olson YMCA is accredited by the American Camp Association and adheres to its program and safety standards. 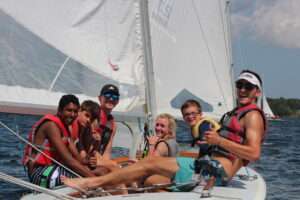 Learn to sail a Sunfish or be skippered by one of our many talented staff on a big boat! 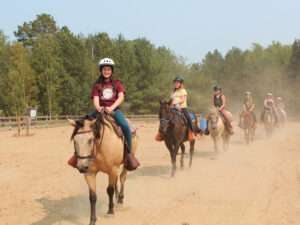 Camp Olson has their very own herd of horses. All campers have the opportunity to engage with these magical creatures on a ring ride, trail ride (11+) or ground activities. 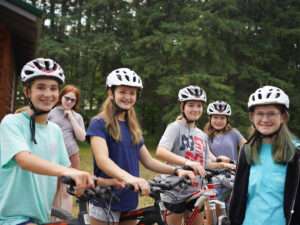 Campers can ride beginner to advanced rides on our miles of trails and skills course with an experienced staff. 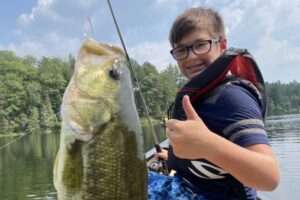 Fishing at Camp Olson is second to none as we are situated on 5 lakes, three of which are entirely within Camp Olson’s 1200+ acres. Fish from our dock, pontoon, or canoe! 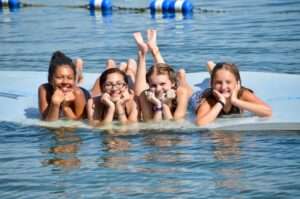 Cool off at our waterfront where you can swim under lifeguard supervision, play on our keylog or watermat, build sandcastles, or visit the Sauna on a chilly day. 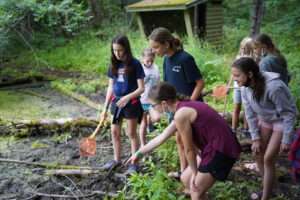 Our resident naturalist can help introduce you to much of the diverse flora and fauna around camp. Nature hikes, stargazing, the Bog walk, and the Eco-Challenge are just a few highlights. 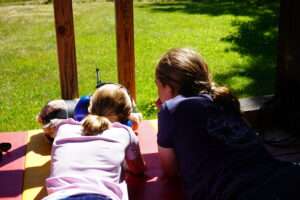 Master Archery, Riflery, Hatchet Throwing and Sling Shots under the guidance of our staff. 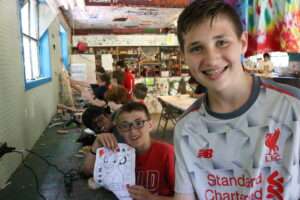 Campers have the opportunity to create a wide range of unique projects including tie-dyes, candles, painting, sculpture, jewelry making and so much more. 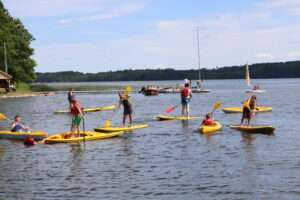 Canoes, Kayaks, Paddleboards galore! Campers love the chance to cruise around Camp Olson bay on one of these exciting crafts. 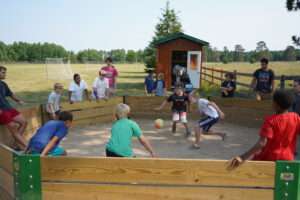 Our Athletic Frield is home to a number of games, like 9 Square, Soccer, Volleyball, Teatherball, Gaga Ball and more!

Each evening we will have various activities for the whole camp. These include campfires, Capture the Flag, Predator Prey, Counselor Hunt, Beach Skit and the Big O Game Show.